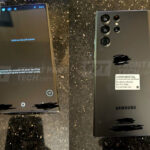 We have got the first live pictures of Galaxy S22 Ultra, courtesy of Front Page Tech. The pictures show the phone’s front and back and it seems like an amalgamation of the Galaxy Note 10+ and Galaxy S21. The front boasts a large Infinity-O display with curved sides whereas the clean back sports a familiar […]