If 2011 is looking good for Samsung, next year is expected to be even better. At an event in California, Samsung talked about its upcoming technologies, some of which is expected to make its way out next year.

The 2560×1600 pixel display that was showcased recently will mostly be out on the upcoming Galaxy Tab. TheStreet who has published the article says, Samsung is working “with CPU/GPU providers to find enough horsepower to drive that kind of a high-resolution display with sufficient speed.”

Another interesting revelation is that the Korean giant will “offer a pure cloud smartphone in 2012.” Well, this could be very well a Chrome OS-enabled phone but nothing’s been confirmed as yet. TheStreet again speculates that Samsung could be working on its cloud OS.

Other things Samsung talked about were a dual-screen smartphone and phones with RFID. 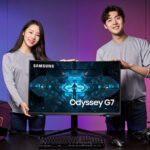