First announced at CES earlier this year, Samsung’s Jet Bot AI+ robot vacuum cleaner will start selling across the globe. Launched in the US and select European countries this month and available later this year in Latin American, Southeast Asian and CIS regions, the Jet Bot AI+ claims superiority in cleaning over its competitors. Samsung […]

Samsung, India’s one of the leading brands of consumer electronics, has enhanced its Digi-Touch Cool technology for refrigerators. The new digi-touch cool technology lets users control their refrigerator settings with a simple touch without opening the refrigerator door and help save energy by retaining cooling. Samsung’s new direct cool single door refrigerators come with this […] 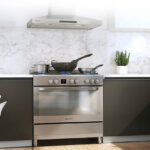 We have covered a lot of home appliances in the past but we’ll be honest, covering a gas burner is a first. Behold the 5 Gas Burner Stainless Steel Cooker that Samsung launched in the South African market. The NY5000TM is a flexible cooktop that integrates five burners, which includes triple burners that work conventionally […]

Samsung today announced its top-of-the-line refrigerator in the Indian market. It’s the SpaceMax Family Hub Refrigerator that not only features oodles of space to store food but also comes with connected features that allows to do more with other devices in the household. Right on the front is the 21.5-inch Full HD display along with […]

Samsung has teamed up with Disney in South Korea to launch Frozen II limited edition air conditioner. Limited to just 2020 units, the wall-mounted windfree AC (model AR07T9170HC) will come with a panel with an imprint of Elsa (one of the main characters in the movie). However, Samsung will also bundle another plain panel that […]