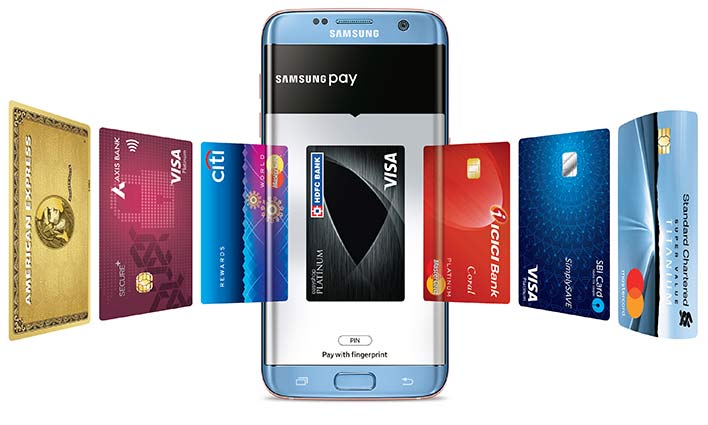 Earlier this month, Samsung initiated the early access program for Samsung Pay users in India. Now Samsung has formally introduced the service, enabling the service to all who have a compatible Samsung phone. Samsung Pay, for the uninitiated, is Samsung’s mobile payment solution that allows users to make payments from their cards to the merchant through the phone.

Currently, Samsung Pay works with credit or debit cards issued through banks such as Axis Bank, HDFC Bank, ICICI Bank, SBI, Standard Chartered and more recently, American Express. Citibank card support will be added in the coming weeks. The service will work on devices like Galaxy Note5, Galaxy S7 series, Galaxy A7, Galaxy A5 and Samsung Galaxy S6 edge+ and will also enable support for its Gear S3 smartwatch.

Samsung Pay is different than other mobile payment solutions like Android Pay and Apple Pay, both of which are unavailable in the Indian market. The major difference that works to Samsung Pay’s advantage is that it works almost everywhere. All a merchant needs is a POS terminal (card swipe machine) and with the help of Magnetic Secure Transmission (MST), Samsung Pay user can transact through the phone, ‘fooling’ the POS terminal that a card has been swiped.

Using Samsung Pay is also secure as you don’t have to present a physical card and the POS terminal will detect the digital card number that Samsung Pay allows when a user adds the card to the service.

Samsung Pay also supports Paytm and will add support for UPI in the near future.

Scroll below to watch a short video on how Samsung Pay works.

Samsung Pay is an example of how we continue to push the boundaries of innovations to make life simpler and better for consumers. I am confident Samsung Pay will redefine digital payments and contribute to Digital India